US Wind Industry Could Drive A Quarter-Million Jobs By 2020, Says Navigant

A new analysis of the US wind energy sector by Navigant Consulting could see the sector drive up to 248,000 jobs and $85 billion in economic activity over the next four years.

The American Wind Energy Association (AWEA) highlighted the new analysis by Navigant Consulting on Thursday, alongside its own white paper which highlighted the economic benefits the wind sector already delivers to the US economy — specifically, that the US wind industry currently supports more than 100,000 jobs across all 50 states. Navigant Consulting believes that that number will only increase, with 248,000 total jobs by 2020, helping to deliver 35,000 megawatts (MW) of new wind power capacity through 2020. 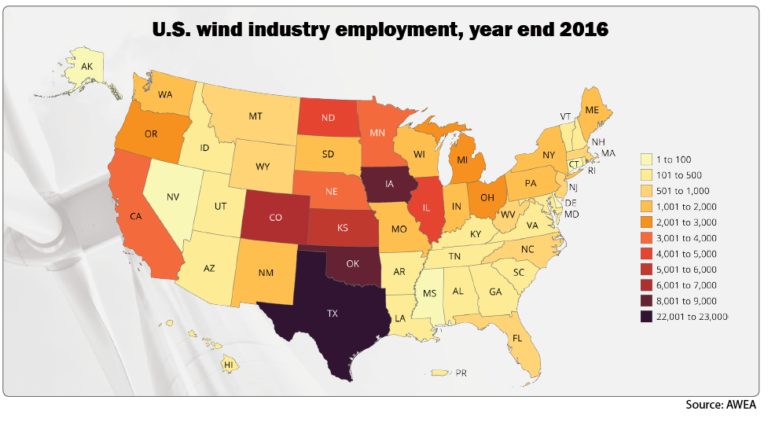 And that’s with Donald Trump as president.

“Growing wind energy revitalizes America’s rural areas and Rust Belt manufacturing centers,” said Tom Kiernan, CEO of AWEA. “With over 100,000 jobs today, the industry is just getting started. This new analysis projects the industry could drive nearly a quarter million jobs by 2020, with $85 billion in economic activity over the next four years alone.”

“American ingenuity and hard work have driven the cost of wind down by two-thirds since 2009, propelling wind to contribute 30 percent of power plant capacity added over the last five years. The policy certainty provided by the 2015 Production Tax Credit phase down has allowed the industry to make long-term investments in the American workforce and manufacturing to further bring costs down.”

Navigant, based off its scenario of more than 200,000 jobs and an additional 35,000 MW of new wind capacity through 2020, highlighted the “significant impact” that the wind industry would have on the US economy. Specifically, investments in new wind turbines, construction and operations expenditures, and tax payments could support up to $24 billion in annual economic impact. 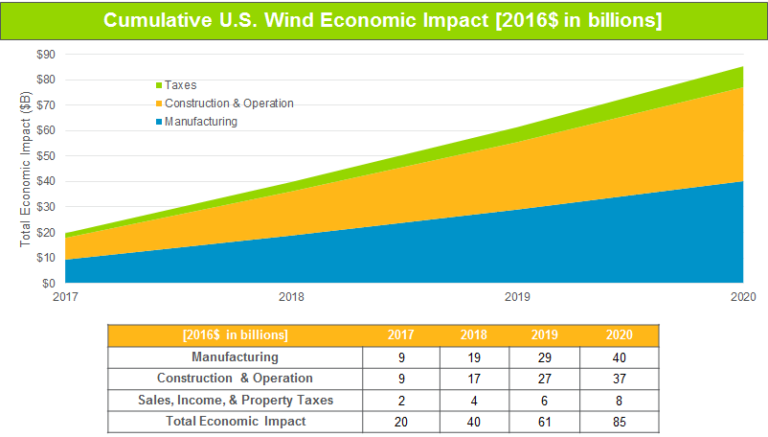 The Navigant analysis comes just days after the AWEA reported significant growth in the country’s wind energy industry throughout 2016, which supplied more than 5.5% of the country’s electricity throughout the year. Of specific import from the 2016 figures was the role that wind energy was playing in rural America — home to 99% of all wind turbines. This is important when we take into account Navigant’s investment predictions. Navigant calculates that wind activity will pay over $8 billion in taxes over the next four years, in addition to the tax revenue already being generated from existing wind projects — significantly important money-makers for rural America.