In late February residents of the Town of Columbia and Washington County Commissioners each approved Tax Increment Financing (TIF) and Community Benefit Agreements between the localities and Downeast Wind. These agreements not only guarantee specific amounts of revenue to local governments over the lifetime of the project, but also guard against tax shift losses, preserving state aid levels for the respective communities.

The Downeast Wind project will provide close to $20 million in new local revenue for Washington County and the Town of Columbia over the lifetime of the project, including: 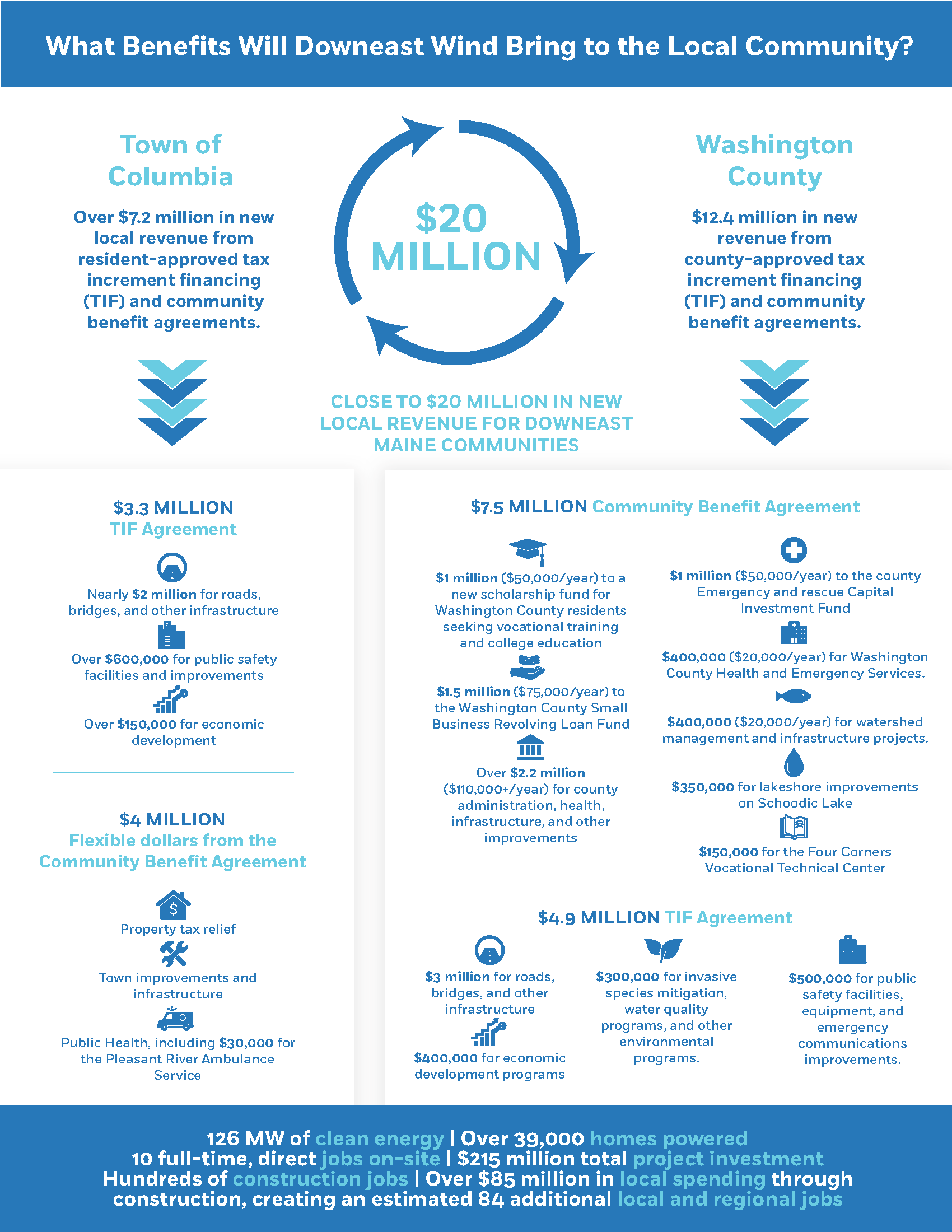 As part of the agreements, money set aside for economic development in Washington County will go towards training and education as well as the promotion of tourism, agriculture, and timber harvesting. Funds are also allocated towards environmental stewardship and protection, including mitigation of milfoil and other invasive species, water quality assessment and improvements, and erosion control.

The agreements also provide funds specifically targeted for improvements in the communities and unorganized territories of western Washington County. This includes a one-time payment of $150,000 to support the vocational training center being developed at Four Corners in Columbia, as well as $350,000 targeted for lakeshore improvements at and around Schoodic Lake.

Other payments from Downeast Wind will occur on an annual basis, providing an ongoing stream of revenue for a wide range of programs and services including economic and workforce development initiatives, land and resource conservation, and infrastructure and capital investment programs. Some of the specific initiatives being undertaken by the county include $50,000 per year for a scholarship fund that can be accessed by Washington County residents of all ages seeking vocational training and higher education, $75,000 per year to support the Washington County Small Business Revolving Loan Fund, and $70,000 per year in direct payments and contributions to investment funds that support Washington County public health and emergency services networks.

In addition, Downeast Wind is expected to generate up to $85 million in local spending during the construction phase of the project. This spending is expected to generate up to 84 induced local and regional jobs as well as hundreds of temporary construction jobs. Once completed, the project will have 10 full-time, direct jobs on site as well as additional contracts with local vendors for services such as plowing access roads and other maintenance.