A new study shows states with wind and solar energy attract businesses and create jobs in the thousands. The study, released by the US Retails Industry Leaders Association (RILA) and the Information Technology Industry Council (ITI), ranks all 50 states. Maine was ranked #14 in the corporate clean energy procurement index. Downeast Wind hopes to keep moving the state up this ladder, increasing job growth and boosting economic development in the region! 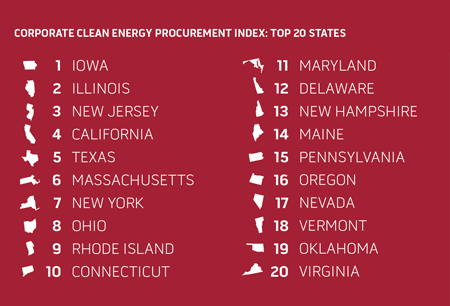 Click below to read a Clean Technica article on the study.

US States With Clean Energy Are Creating Jobs & Economic Growth

A new study has concluded that states like Iowa, California, & Texas, which have strong clean energy industries, are also attracting businesses and creating jobs in the thousands.

The “groundbreaking study” released this week by the US Retail Industry Leaders Association (RILA) and the Information Technology Industry Council (ITI) ranked all 50 US states based on the ease with which some of America’s “most recognizable brands” are able to procure domestic renewable energy. The study — Corporate Clean Energy Procurement Index: State Leadership & Rankings, compiled by Clean Edge on behalf of RILA and ITI — concluded that not only is a strong state clean energy program beneficial for creating economic growth and more jobs, but the report also showed that demand for clean energy among retailers and technology companies is expected to skyrocket to 60 gigawatts by 2025.

Iowa led the way with an overall score of 74.73, nearly six points ahead of number two, Illinois, which scored 68.79.

The premise behind the key findings from the report explains that as companies become more interested and committed to investing in clean energy themselves, they will look to expand their businesses and operations in states which have strong commitments themselves to clean energy. “States that limit customer choice can see higher RE costs, making their markets less attractive,” the authors of the reports conclude.

“That means the structure of a state’s electricity market can directly influence where corporations choose to invest in renewable projects, and in which states they decide to expand their operational footprint.”

“Retailers are at the forefront of the growing trend to procure clean energy to power their operations; this index will help them focus on the states that are conducive to doing business,” said Adam Siegel, Senior Vice President, Research, Innovation & Sustainability at RILA. “We urge state governments to look hard at steps they can take to promote customer choice for renewable energy so that they can open the doors to new investments.”

“The technology industry is increasingly transitioning to clean energy to meet customer demands, consumer expectations and our own strong sustainability commitments,” added Rick Goss, Senior Vice President for Environment and Sustainability for ITI. “Clean and renewable energy sources are good for the environment, and they provide energy reliability and price stability benefits that are good for business. States interested in growing their tech sector should embrace this trend.”

The report also outlines five actions that can be taken at the state level to better support the growth of corporate renewable energy procurement: