Renewable generation capacity expected to account for most 2016 capacity additions

Once final data are in, EIA expects 24 gigawatts (GW) of new generating capacity to be added to the power grid during 2016. For the third consecutive year, more than half of these additions are renewable technologies, especially wind and solar.

Of the 2016 renewable additions, nearly 60% were scheduled to come online during the fourth quarter. Renewable capacity additions are often highest in the final months of the year, in part, because of timing qualifications for federal, state, or local tax incentives. Estimated fourth-quarter capacity additions for 2016 are based on planned additions reported to EIA and are subject to change based on actual project schedules.

Monthly U.S. renewable electricity generation peaked in March as high precipitation and melting snowpack led to a monthly peak in hydroelectric generation and strong wind resources led to a monthly peak in wind generation. Most renewable generation comes from the Western census division, which accounted for the majority of the hydroelectric (63%) and solar (77%) generation in the United States in 2016. Wind generation was more evenly spread across the country with 37% occurring in the Midwest, 35% in the South, 24% in the West, and the remaining 4% in the Northeast. 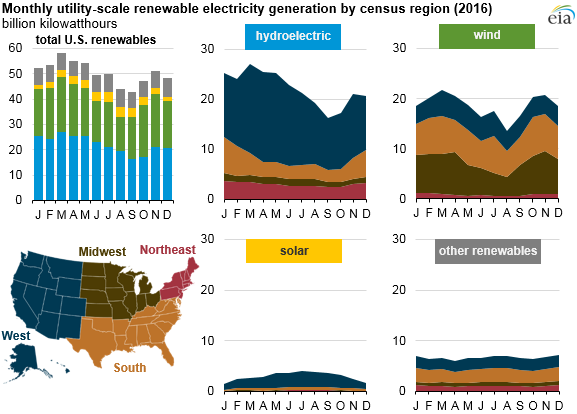 The distinction between capacity and generation shares is important to recognize. Because non-dispatchable technologies such as wind and solar facilities generate power only to the extent those respective resources are available, their capacity factors are typically lower than those of other resources. 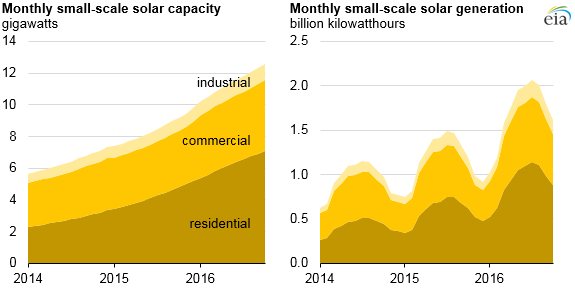 Other renewable electricity highlights in 2016