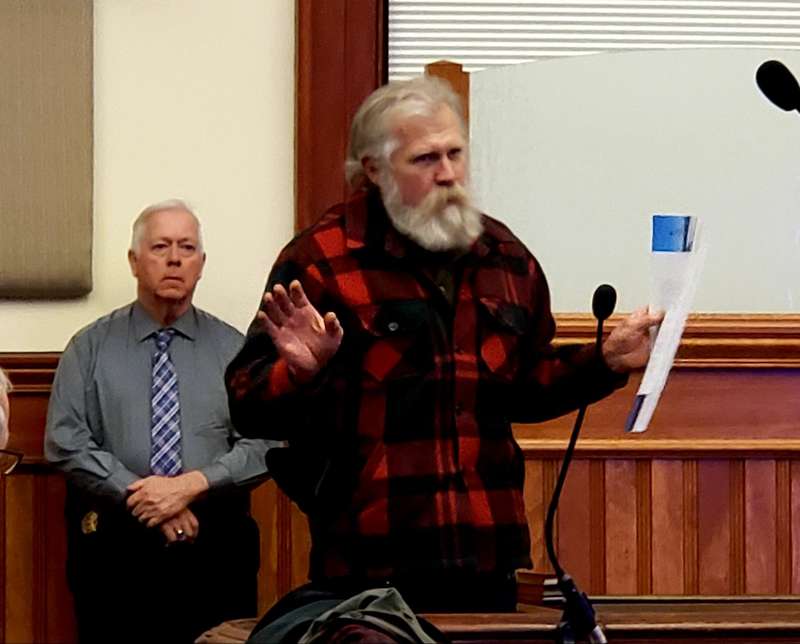 Washington County Sheriff Barry Curtis looks on as Larry Balchen speaks in opposition to the Downeast Wind project. Balchen showed a wide-angle photo taken from Route 1 to demonstrate how far the towers might be visible on what Balchen called the “last 100 miles of undeveloped land on the eastern seaboard.” Photo by Sarah Craighead Dedmon

Washington County Commissioner Chris Gardner opened a public hearing last week explaining what the hearing was — and was not — for.

“I understand the large number of people in this room tonight is because there are some strong feelings on this subject. I want to make it clear that the commissioners are not the committee of jurisdiction for approving or disapproving this project,” said Gardner. “It’s approved or disapproved by the DEP and the LUPC.”

The project in question is a 30-turbine wind farm proposed by Apex Clean Energy, to be located in Columbia and unorganized townships 18, 19 and 24.

The Maine Department of Environmental Protection (DEP) and Land Use Planning Commission (LUPC) are responsible for permitting the project, but the commissioners called the hearing to gauge interest in creating a Tax Increment Financing District (TIF) for the portions of the farm which will stand in the unorganized territories. The town of Columbia, where Apex plans to locate eight of its 30 turbines, is considering a TIF, too.

Apex is based in Charlottesville, Virginia, and according to its website currently has more than 50 wind projects under construction or operating in 19 states and Canada.

Though the hearing was scheduled to discuss the TIF, nearly all of the speakers weighed in on the wind farm itself. Most of those who spoke in opposition have property along Schoodic Lake, partially located within the “viewshed” of the proposed turbines.

Robert McKay of Bangor owns two properties on Schoodic and was the first of many to complain about a lack of communication between Apex and affected landowners. McKay said he did not believe Downeast Wind Project Manager Paul Williamson’s assertion that the wind farm would only be visible from certain parts of the lake.

“When you have a windmill that’s twice the size of the Statue of Liberty, [a windmill] that’s five times the height of the tallest building in the state of Maine...if you’ve ever been at Schoodic Lake and you're telling me you can’t see that, you’ve never been to Schoodic Lake,” said McKay. The turbines will measure 600 feet in height and will also stand on an elevation.

Sue Mills of Jonesport has property on Schoodic and said she’s especially concerned about infrasound coming from the windmills. “Infrasound is low, you don’t hear it, but your body is pummeled by it,” said Mills. “It doesn’t go through our ears, it goes through our bodies.”

Johnson-Rolfe added that though the commissioners do not vote on permitting the farm, she believes the county has some influence because Washington County Manager Betsy Fitzgerald is vice chairman of the LUPC.

Cecil Gray of Columbia spoke in favor of the project and shared his positive experience as a blueberry farmer who leases land to Apex.

“They’ve been upfront with me right from the beginning. I have a crop-loss amount that they pay,” said Gray. “What they’re going to bring to the table to these towns is good. It’s going to be benefits to the taxpayers in Columbia.”

Mark Brown of Marshfield spoke in favor of the farm’s renewable energy, which Williamson called a “natural resources product” and which would be sold back to ISO New England, the energy grid that largely manages energy production in New England.

“In this type of energy production, the carbon reduction based on using wind energy is reason enough to support this. This TIF money should be appropriated for protecting our natural resources for perpetuity,” said Brown. “I won’t see these wind machines, but I would be happy to see one in my backyard to avert the crisis we’re headed into.”

Cherryfield Foods is one of the largest blueberry growers and processors in the county, and will be leasing its land near Schoodic Lake to Apex, should the project be approved. Cherryfield Foods General Manager David Bell spoke in favor, saying the economic benefits of the farm could be immense at a time when the blueberry market is at a serious low.

“Renewable energy is not our core focus, but this will provide important revenue to the farm at a time when wood and berry markets are very, very low,” said Bell. “It’s an economic opportunity for Washington County and in order to maximize the impact, it’s important the county get the tax.”

A TIF is a business development incentive created by the state. When a town or county adopts one, the value of new business development in the TIF district is sheltered from the state’s property valuations. By sheltering that increase in valuation, state school subsidies are not reduced, county taxes do not increase and revenue sharing is not reduced as a result of the growth. Instead, those taxes are paid into a TIF fund and split between the county and the businesses. Without a TIF, those property taxes are collected and used throughout the state, instead of held within the county.

If approved, the Downeast Wind Farm TIF will last 25 years and will split the benefits 70/30 between Apex and the county. Commissioner Gardner said a 70/30 split is more common to energy TIFs and relates to the “grander scale” of the investment.

During his presentation at the hearing, Williamson said Apex will be investing greater than $215 million into the Downeast Wind project, with $28 million going to the landowners leasing their land over 30 years, and $8.4 million paid out during the construction phase, which Apex projects will create several hundred jobs. Roughly ten onsite jobs are expected to be created for the wind farm. Though the exact geography of the district has not been established, it is expected to cover at least 14,000 acres. Of those 14,000 the actual wind infrastructure and roads will occupy roughly 100 acres, and all of the land would be leased from between 30 and 40 private landowners.

Downeast Wind is also pursuing a Community Benefit Agreement, which will provide funds for local investments, including a one-time payment of $500,000. Of that, $350,000 is suggested for property improvements around Schoodic Lake.

In total, Williamson said the combined payments of the TIF and Community Benefit Agreement will equal $11.5 million paid out to the county over the course of 25 years. Apex hopes to see the TIF enacted in 2021.

“We hope to be able to build this all in 2022, and have it operational in 2022,” said Williamson, noting that construction involves many variables, including weather. “And we have to be careful how we construct our schedule so it coordinates well with the blueberry growers,” he said.

The county commissioners have scheduled a second public hearing on Thursday, Feb. 13 at 4 p.m. After that, they will vote on the matter. 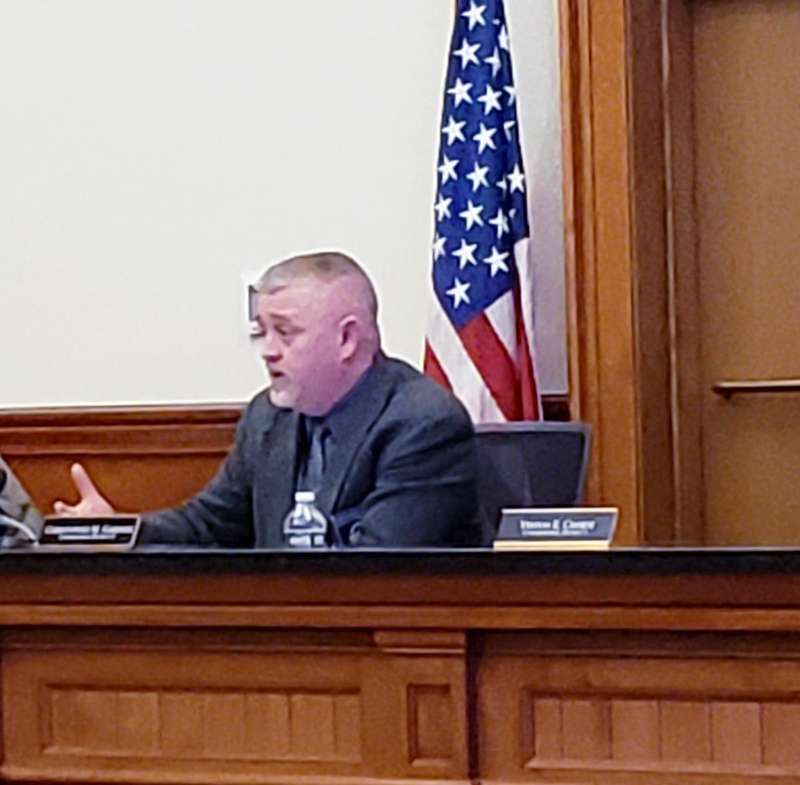 Chairman Chris Gardner said the commissioners worked for many years to disband the Land Use Planning Commission in order to keep local control over development in the Unorganized Territories. “We can appreciate and understand that people want to have as much of a say as possible. We agree with you on that,” said Gardner. “I want to see the LUPC disbanded. Unfortunately, not everybody agrees with us.” Photo by Sarah Craighead Dedmon

Representatives from Apex Clean Energy, left, presented in advance of the county’s lawyers, right, at a public hearing convened by the Washington County Commissioners on Thursday, Jan. 9. Photo by Sarah Craighead Dedmon