COLUMBIA — Pending final approval by regulatory agencies, construction should start in 2018 on a 90-megawatt wind-power
project in western Washington County. The project, which will generate enough electricity to power 27,000 homes, represents a $106 million investment in the region.

Being developed by Charlottesville, Virginia-based Apex Clean Energy, the project known as Downeast Wind would involve erecting 30 wind towers and connecting their turbines to the Emera Maine substation on the Station Road in Columbia. Each turbine could produce three megawatts of electricity.

Based on several factors (including favorable wind studies and proximity to existing electrical transmission lines), the wind turbines will be located on higher land north of Route 1 and east of Route 193.

“It’s a premier site,” said Paul Williamson, development manager for Apex Clean Energy. The terrain, which he described as a “higher plain geographically,” catches the onshore coastal winds. Agriculture, in the form of blueberry barrens, dominates the existing use of the land, and “there are transmission lines that already run through the area,” he said.

And a ready market exists for wind-generated electricity. “New England right now is one of the most competitive renewable energy markets” in the United States, Williamson noted. 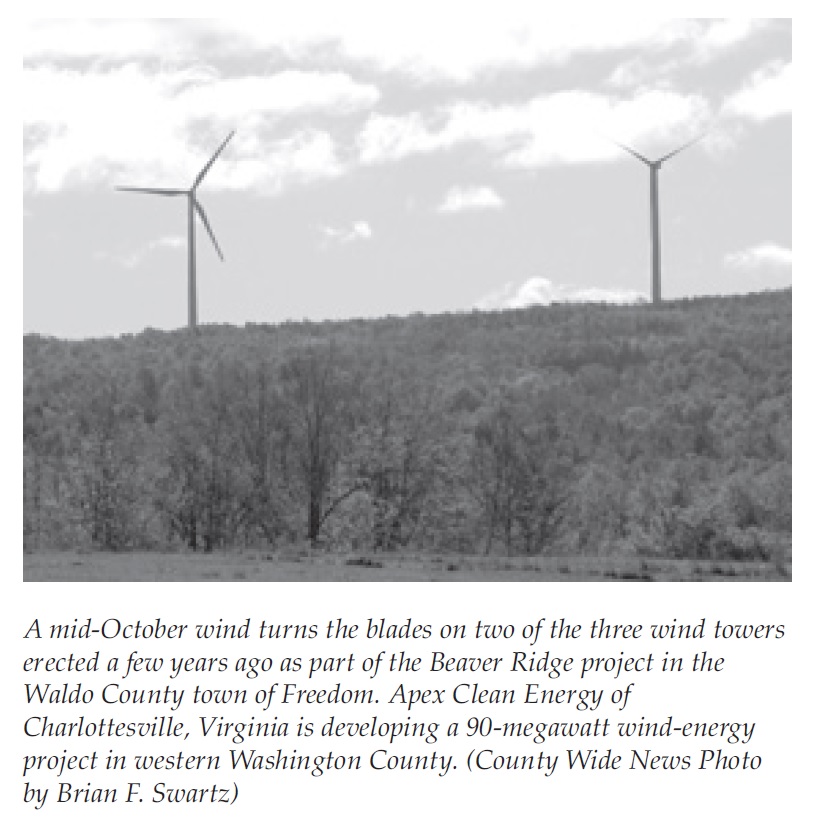 According to Williamson, Apex Clean Energy is studying properties in Cherryfield, Columbia, and townships 18 and 19. No final site selection has been made; the company “will decide where to best site the turbines” to achieve cost- and -power production efficiency, he said.

Apex Clean Energy started looking at potential sites in the area in 2013. Voters in Cherryfield and Columbia enacted moratoriums on wind-energy projects to give each town time to develop wind-energy ordinances, and with these now in effect, development of Downeast Wind can proceed.

The project’s timeline should take about three years. The tower sites under consideration have “as little environmental impact as possible while generating clean energy,” Williamson said. The related environmental permitting will continue while scientific studies focus on bird migrations, locations of wetlands, wildlife habitats, and other environmental concerns.

According to Williamson, Apex Clean Energy plans to submit a full application to the Maine Department of Environmental Protection in June 2017. The DEP could take six-to-nine months to respond, he indicated.

Construction should start in 2018; Downeast Wind should become fully operational in 2019 at the latest. “We might consider doing a winter construction on this project,” Williamson said.

Founded in 2009, Apex Clean Energy has “projects all over the country right now,” said Cat Strumlauf, public affairs associate with the company. Of Apex projects under way in 25 of the 48 continental states, Downeast Wind is the only one in New England.

The wind towers currently proposed for Downeast Wind will be approximately 80 meters (262 feet) tall, and each turbine blade will be about 50-60 meters (164-197 feet) in length. Each turbine will have three such blades. A Spanish company will supply the turbines; the towers and blades could come from American or Canadian manufacturers.

“The turbine models are typically picked based on the wind characteristics of the site,” said Williamson.

According to Williamson, the power lines from each turbine will run underground to a small substation at the Downeast Wind site; above-ground power lines approximately three miles in length will connect that substation to the power grid via the existing Station Road substation, which has one unused bay.

Apex Clean Energy “will be selling the power into the Maine grid” and “has a term sheet with the [Maine] Public Utilities Commission,” Williamson said. “This is the first step prior to the contract” for selling power in the state.

Apex Clean Energy is working with local landowners who will lease land for the wind towers. The company plans to hire as many local businesses as possible for the construction phase of Downeast Wind.

“A lot of the ground work and the preparatory work can be done by local contractors,” said Charles Rudelitch, executive director of the Machias-based Sunrise County Economic Council. Its board of directors “voted to support” Downeast Wind “primarily based on the permanent jobs, the property-tax revenue, the lease payments … [and] the economic impact of the construction jobs,” Rudelitch noted.

When completed, the project will employ six full-time turbine technicians.

“I’m glad they want to invest in Washington County,” Rudelitch said. “It is the only proposal I know of at this stage and of their scale in coastal Washington County. The whole region will benefit.”