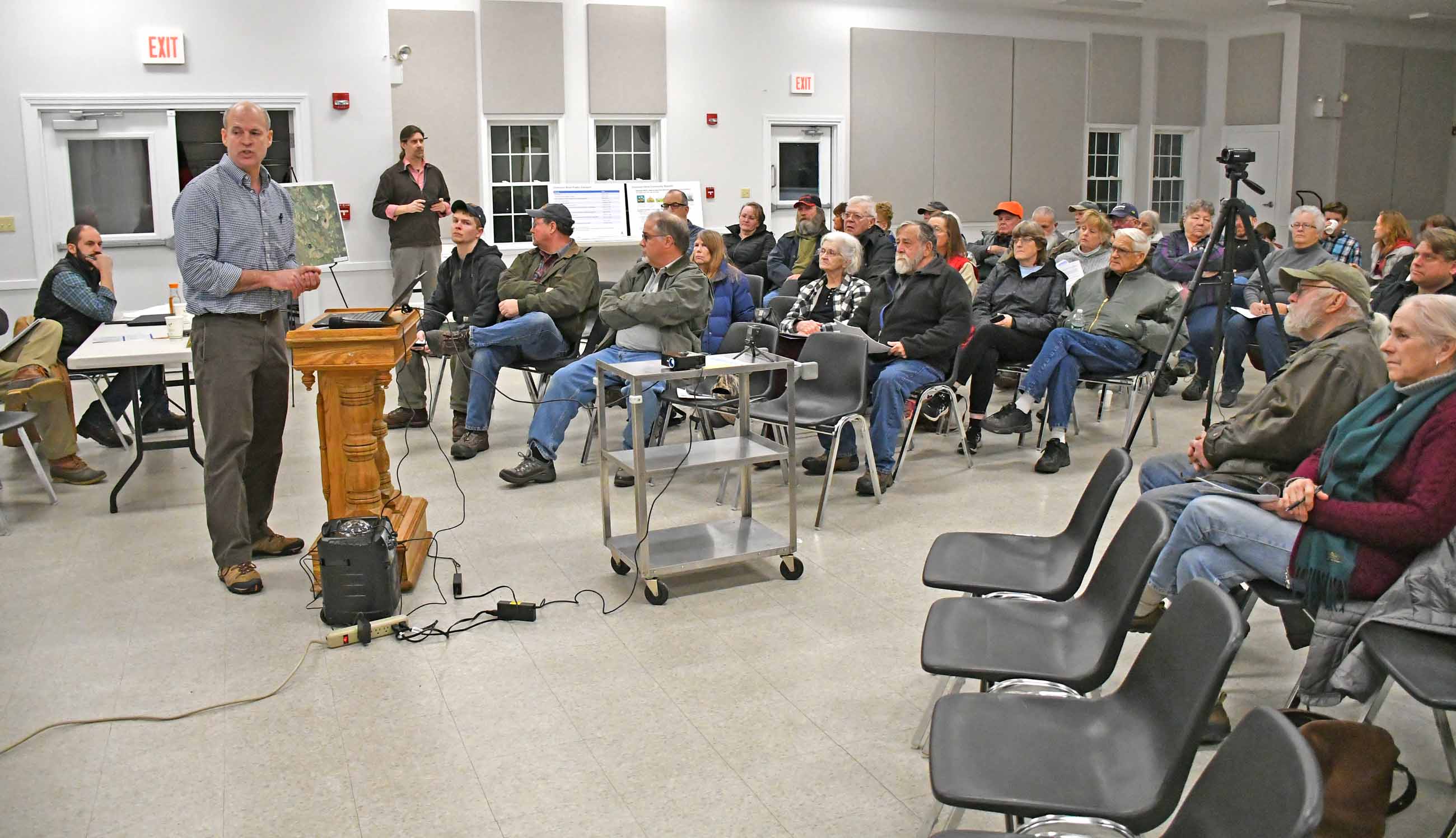 COLUMBIA — Their parked vehicles filling the parking lot, approximately 50 people attended a February 5 public-information meeting at the Columbia Town Office to learn the latest updates on the wind-farm proposed for central Washington County.

Downeast Wind officials hosted the meeting, required by Maine law as planning proceeds on the $240-million project being undertaken by Apex Clean Energy, based in Charlottesville, Virginia. The company has studied for several years the wind potential on the uplands stretching from Cherryfield and Columbia into the unorganized territories.

People listened attentively as Williamson used a Powerpoint presentation to discuss Downeast Wind. Among the factors attracting Apex Clean Energy to the area was the Downeast Loop Transmission Line, into which the wind-generated electricity will be fed for sale to Maine customers. Another factor is the land itself, “a bit of an elevated plain” receiving strong northwest winds and “really robust southwest wind” off the Gulf of Maine, he said.

Apex Clean Energy has whittled the initial 50 proposed wind towers to 30 towers rated at 4.2 megawatts each, for a combined 126-megawatt output. Seven towers will be erected in Columbia and 23 in the unorganized territories. Still studying 34 tower sites, the company has not yet decided which 30 sites will be used.

According to Williamson, Apex Clean Energy will install Vestas V150 turbines standing 410 feet “at hub height” (a wind tower’s top). Each tower will mount three enormous blades, and the overall “tip height” (the point at which a blade tip reaches maximum arc above the hub) will be 656 feet.

The blades will be made from a mixture of fiberglass and resin, with Kevlar and carbon-fiber reinforcing certain sections.

He told audience members that his predecessor had started researching the wind farm, with the towers built in a line south of Schoodic Lake. Apex Clean Energy looked at sites in Cherryfield and Columbia before determining in 2018 that “we needed to reduce the visual impact at Schoodic Lake” by placing the towers elsewhere, Williamson said. 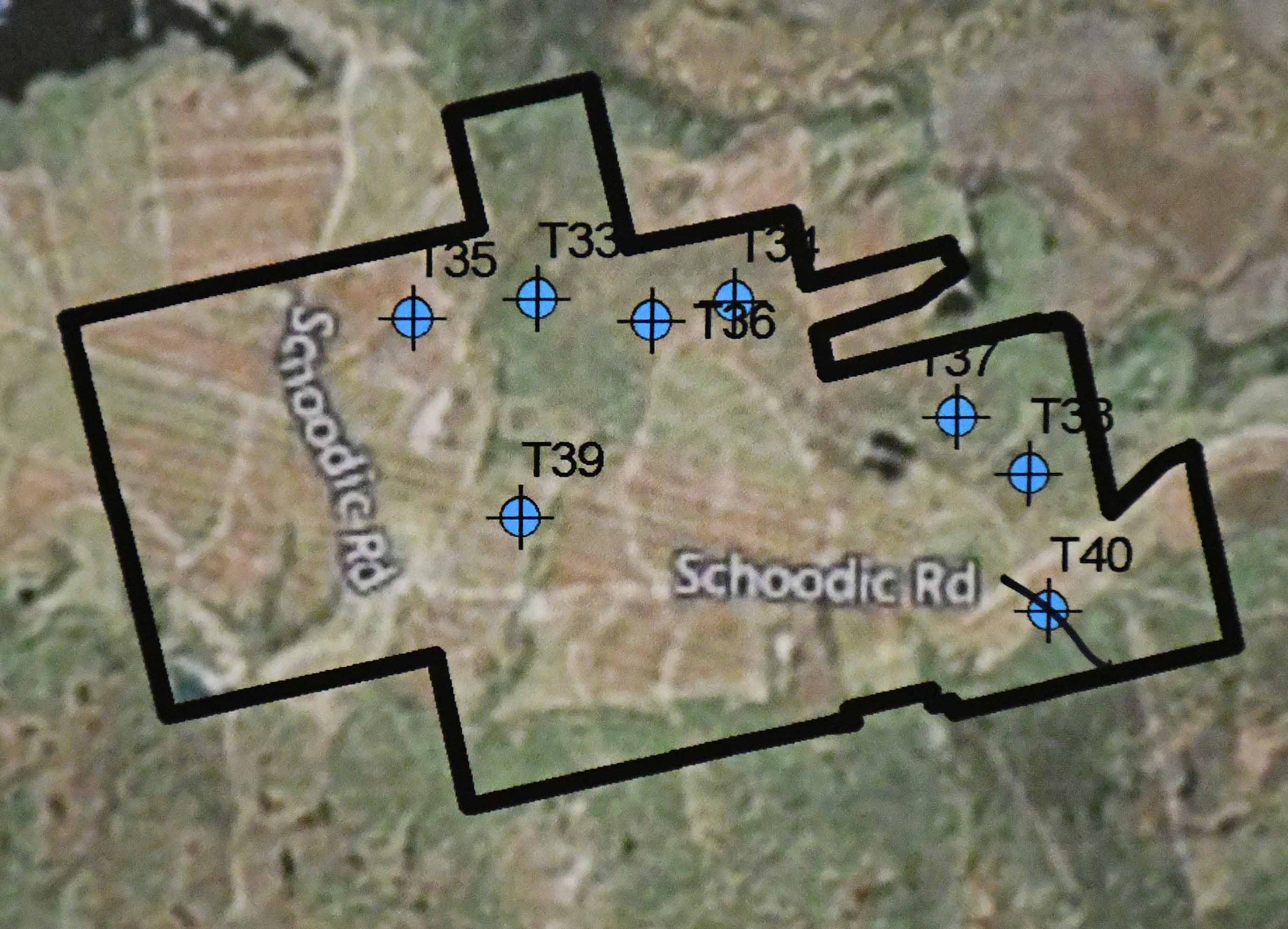 This satellite-view map identifies the eight wind-tower sites that Apex Clean Energy is studying in Columbia. One site, T40 (right), has been eliminated, leaving seven wind turbines to be erected in the town. (Courtesy Apex Clean Energy)

Each tower will be equipped with an FAA-approved radar-equipped lighting system that will activate blinking tower lights upon detecting a low-flying aircraft in the area. Four or five radars will be sited around the project’s perimeter to detect planes; no radar will be placed on a wind tower.

With a projected lifespan of 30 years, Downeast Wind will probably stop running one day. According to Maine law, Apex must submit to the Maine Department of Environmental Protection “a full decommissioning plan” and a “full decommissioning security” to pay for removing all on-site hardware down “to two feet below the ground level,” Williamson said.

Describing Downeast Wind “a manufacturing facility” that will generate electricity, he referred to the particular slides listing the project’s “community benefits,” which will total $19.8 million over 20 years. Columbia will receive $7.4 million, including an average annual payment of $280,000 for 20 years.

Washington County will receive $12.4 million, including an average $482,000 per year for 20 years and $350,000 set aside for property improvements at Schoodic Lake. Camp owners will decide what improvements that sum will fund, Williamson said.

He indicated the project will produce enough power to supply “36,000 Maine homes” and will create 10 full-time jobs. Apex Clean Energy plans to submit its permit application to the DEP “at the end of April” and hopes to receive all requisite permits in June 2021.

Ground-breaking would likely occur late that year, with “the bulk of construction” done in 2022, Williamson said.

He addressed several rumors circulating about the wind farm. During construction, roads will be a maximum 36 feet wide wherever the “crane paths” are required; once the project becomes operational, the roads will be only 20 feet wide.

As for the project’s potential market, Williamson pointed out that the state intends to require Maine power utilities to purchase 700 megawatts of renewable energy per year. Apex Clean Energy will compete for part of that purchase, he said.

Williamson fielded questions after his presentation. Audience members raised interesting points, primarily for clarification, but one woman spoke a little while without asking a question, despite prompting by Williamson. She said that “we are certainly a community that doesn’t like a lot of change here.”

Williamson was followed by R. Scott Bodwell, owner of Bodwell EnviroAcoustics LLC. He has done sound studies for several Maine wind farms, including the nearby Bull Hill and Hancock wind projects in Hancock County.